Summary
Jesus ' parable ofthe rich man and Lazarus indicts us when we who are part of the "upstairs ' crowd ignore the needs ofthe "downstairs " people who are around us.

The title of today's sermon is borrowed from a popular British television series that eventually made its way to American television. Set in the early 1900s, the show was based on the interaction between a family of wealthy Londoners, who were the "upstairs" characters, and the servants who worked for them, the "downstairs" characters.

That show was interesting for Americans because few of us have any experience of household servants -- either having or being one -- so the show provided a glimpse into another world, one where there was a clear dichotomy between the lives of those upstairs and of those downstairs.

Today, however, there is an American version of the upstairs-downstairs split, and it is in the job market. On the one hand, there are those of us who are making enough money to rent or own a home, eat balanced meals, pay for entertainment and even have some money in the bank. Though not all of us would consider ourselves rich, and though some of us are struggling financially, by most measures, many of us are part of the 'hipstairs" world.

On the downstairs side, there is a whole cadre of people who labor at low-paying jobs, those that pay minimum wage or just a few dollars more, for whom such things as having a decent place to live, eating regular balanced meals, and having an entertainment budget are simply not possible -- let alone having some money in the bank. These are the working poor, and they include people who wait on us in restaurants, take our tickets at movie theaters, clean our houses when we use a maid service, and assist us in department stores. Some of those workers have spouses who earn higher wages and others are teenagers supported by their parents. but setting aside those people, the remaining workers are those trying to get by on a miserably low income.

There's a stark view of that world in the recent book Nickel and Dimed,I by Barbara Ehrenreich. For this book, Ehrenreich went to three different locations around the country and for several weeks in each place, she lived and labored as one of the working poor. She forced herself to try to get by just on what she could earn from jobs that an unskilled, middle-aged woman could get. In Florida, she landed a job as a waitress and soon discovered that it simply is not possible to live comfortably on what she could earn there. None of her coworkers were doing much better.

One problem area was housing. Unless you had some money to start with, it simply was not possible to get into decent housing. She lists how her fellow employees were living:

•   Gail is sharing a room in flophouse for $250 a week. Her roommate, a male friend, has begun hitting on her, driving her nuts, but the rent would be impossible alone.
•   Claude, the cook, lives in a two-room aparfrnent with three other people.
•   Marianne and her boyfriend are paying $170 a week for one-person trailer
•   Tina and her husband pay $60 a night for a room at the Days Inn.
•   Joan lives in a van parked behind a shopping center at night, and showers in Tina's motel room.2

Now if you add up how much some of these people are paying weekly, you might wonder why they don't just get an apartment. Gail and her roommate, for example, are paying $250 a week at the flophouse. That's $1000 a month, and for that amount, you should be able to rent a decent apartment. But the problem is the start-up costs. When Ehrenreich asks Gail about this, Gail says, "And where am I supposed to get a month's rent [all at once] and a month's deposit for an apartment?"3 Since she herself is not making enough to get by, Ehrenreich takes a second job as a motel maid, but quickly discovers that she cannot physically handle both jobs.

On her two other experiences, she learns the same things. In Minnesota, she ends up as a Wal-Mart employee, but finds it impossible to make any lasting housing arrangements on the wages she earns. In Maine, she has to take two jobs, one as kitchen helper in a nursing home and the other a housecleaner working for a housecleaning franchise. In none of the three communities is she able to earn over $7 an hour.

Now think about another upstairs-downstairs story, the parable Jesus told in today's reading.

There was a certain rich man who lived very well in a fine house and dined on sumptuous meals. Although his name does not appear in the Bible, this rich man is sometimes called "Dives," which comes from the Latin word for "rich." Outside his gate, however, was a desperately poor man named Lazarus, covered with sores and too sick to work. He was so hungry that he wished he could have even the crumbs that fell from Dives' table. But Dives ignored Lazarus, and eventually the poor man died and was carried by angels to be with Abraham in paradise.

Not long afterward, Dives also died, but he went to Ilades, the final destination of the unrighteous. There, of course, he has big regrets, and too late he cries out for mercy. He even calls to Abraham to send Lazarus to him with a drop of water for his tongue. Abraham speaks plainly to Dives: "During your life you had plenty and Lazarus had nothing. You were in the upstairs family, and Lazarus was not even able to have a place downstairs. But now you are downstairs and Lazarus is upstairs."

There's a version of this parable in Ehrenreich's book. When she worked as a housecleaner, the company did not allow its employees to drink anything while inside clients' homes. One hot day, Ehrenreich was cleaning a house where the air-conditioning had not been turned on. She was on her knees scrubbing the kitchen floor and sweat was pouring out of her, drenching her clothes. The woman of the house was in the kitchen, watching her intently. It occurred to Ehrenreich that perhaps the woman will offer her a drink of water, which, Ehrenreich decides she will accept despite the no-drink rule. But alas, the woman was watching only to make sure this thirsty maid at her feet did not miss any spots. When Ehrenreich finished the floor, the woman said to her, "Could you just scrub the floor in the entryway while you're at it?"4 As Jesus told it: "Lazarus ... longed to satisfy his hunger with what fell from the rich man's table ...."

According to the verses that immediately precede this parable, Jesus told it in response to some Pharisees whom he knew to be "lovers of money."5 Not many of us would identify ourselves by that phrase, so we might fail to see that this parable has something to say to us. But Jesus was not implying that the Pharisees went home each night and gleefully counted their shekels. Rather he meant that they had become so attached to the benefits of being in the upstairs crowd that they could not see how desperate the downstairs people were.

An Ann Landers column some years ago had a letter from a man who identified himself as a Christian but who was like these Pharisees. The man described how he handled tipping when he ate out. Instead of leaving any money for the server, he left a gospel tract, figuring that the best "tip" he could give was to tell the server about Christ. (I wonder if there is a special place in hell for guys like him, and after reading of the fate of the self-centered rich man in Jesus' parable, it seems altogether possible! )

Ann Landers' branded him as a self-centered cheapskate. And the responses from her readers published subsequently agreed. Jesus would call this man a lover of money. While many of us don't care for the tipping system, the fact is that people who wait tables, clean motel rooms, drive taxis and so on are often struggling to get by. Like the system or not, when we tip, at least some of the time, we are actually helping the poor.

Tipping, of course, is the not the main point of this sermon, nor was it of Jesus' parable. The point is that refusing to care about the plight of our fellow humans is no excuse when we are called to give account of our lives. The problem with Dives is not that he was rich, but that he was so comfortable ignoring poor Lazarus starving at his gate. When we face God, it will not be enough to say we had intended to do something eventually, or that we didn't make the plight of the poor any worse. Nor will it be sufficient to say that the poor should have gotten a job. In many cases, they are working, and sometimes at more than one job.

Jesus was warning of the danger of becoming blindly self-centered when we have reasonable share of the world's blessings. Jesus did not tell the parable to teach about heaven and hell. but rather about the upstairs and downstairs of this life. He told the parable to emphasize the importance of doing the caring thing when the opportunities to do so are right in front of us. 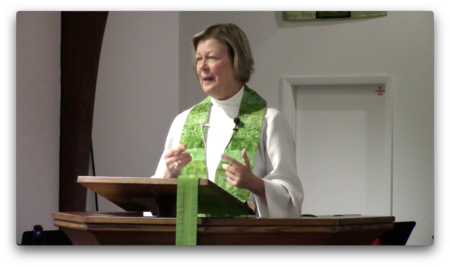 Sermon for Twenty-third Sunday after Pentecost

Sermon for All Saints Sunday